Fluctuation in exchange rate has been a recognized catalyst that brings about change in other macroeconomic indicators. This phenomenon was underscored by series of mechanisms through which economic activities of a given country reflect on its exchange rate to other international currencies. In order to assess the empirical influence of rising fluctuation in exchange rate, this study focused on the impact of exchange rate volatility (EXV) on selected macroeconomic variables in Nigeria which included gross domestic product (GDP), foreign direct investment inflow (FDI), index of trade openness (TOP) and inflation rate (INF). The Autoregressive Distributed Lag model (ARDL) and Vector Error Correction Model (VECM) were used in the study. Annual time series data from 1981 to 2015 were obtained from the Central Bank of Nigeria Statistics Bulletin 2015. Having carried out necessary pre- and post diagnostic tests, the results show that increase in exchange ratevolatility significantly decreased gross domestic product by about 0.003 per cent on average per annum. There is further evidence of short run and long run significant positive effect of exchange rate volatility on trade openness. Although EXV has both negative and positive relationship with FDI in the long run and short run respectively, its effect was considered insignificant. Similarly, EXV has insignificant positive effect on inflation rate. Lastly, while there is evidence of short run unidirectional causality from EXV to GDP and TOP respectively, the study found cases of independence between EXV and FDI on one hand and EXV and INF on the other hand. Above key findings led to the study’s conclusion, among other things, that exchange rate volatility is one of the major determinants of gross domestic product growth in Nigeria. As such, it was recommended that adequate effort should be made to minimize fluctuation in exchange rate through necessary fiscal and monetary policy as well as close monitoring of key players in the foreign exchange market

1.1 Background of the Study

Statement of the problem 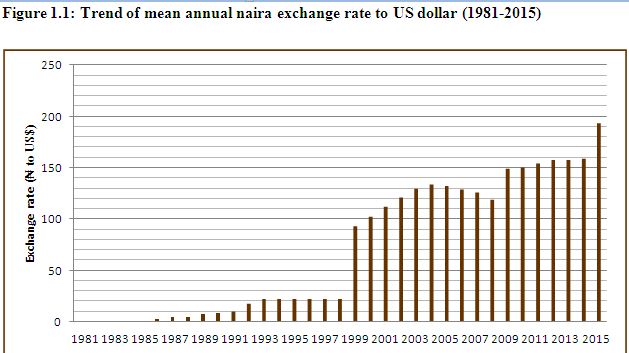